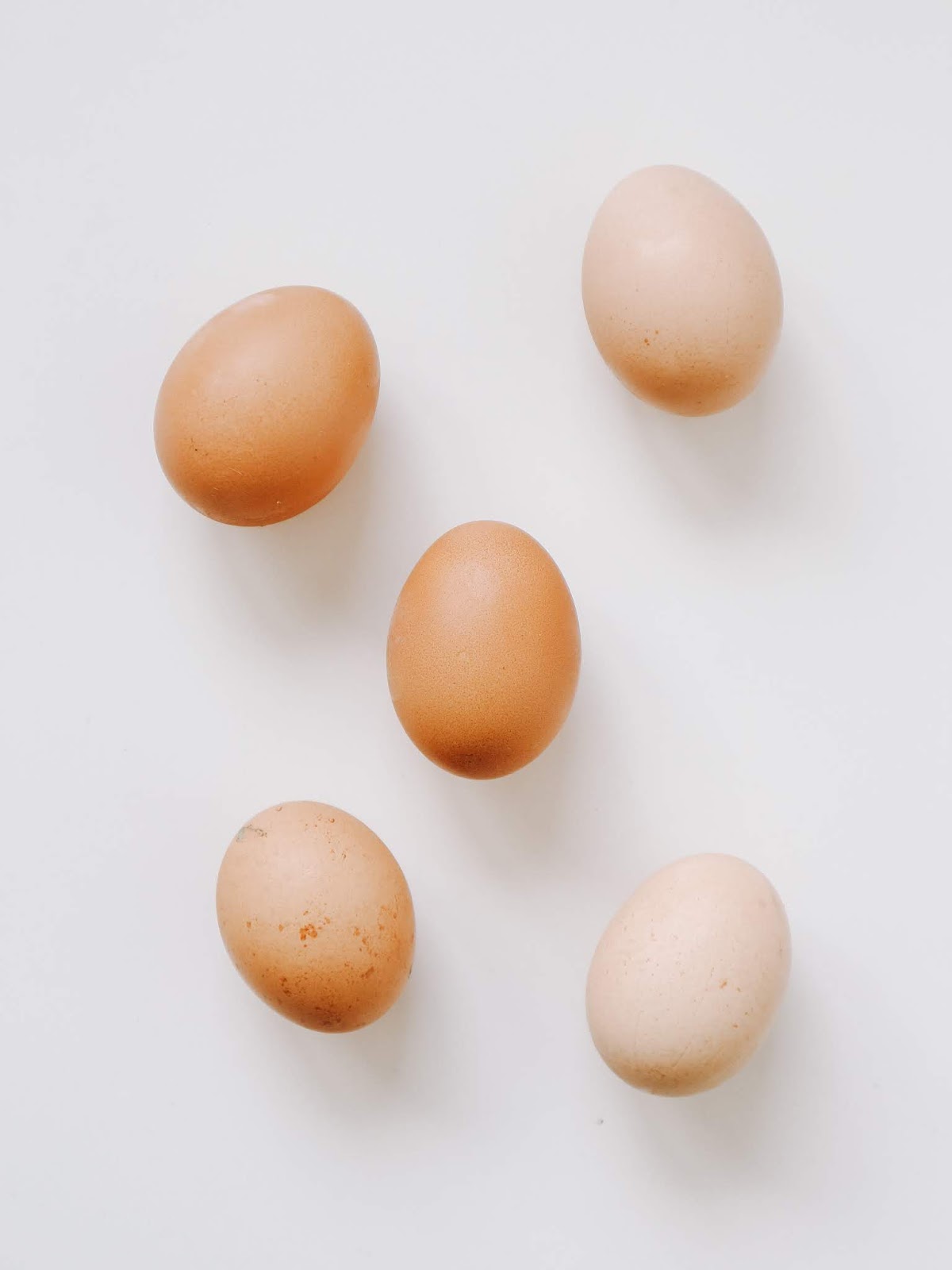 Eggs are missing only in a few households. They have versatile use in the kitchen – we eat them for breakfast, lunch and dinner, in any cooked-alternative, they’re an integral part of desserts and cakes. They have many benefits – they contain few calories, up to 12% is protein and they are a source of vitamin D and B12. They are relatively easy to digest, and even assumptions that they increase “bad” cholesterol levels in the blood were proved to be false (but the fact remains that one egg contains up to two-thirds of the recommended daily cholesterol intake, but since the liver then produces less of its own cholesterol, the level is balanced).
As well as the meat and the dairy industry, egg production hides a terrible reality that no one is talking about. And the problem is not only in mass production, but also in small-scale one. 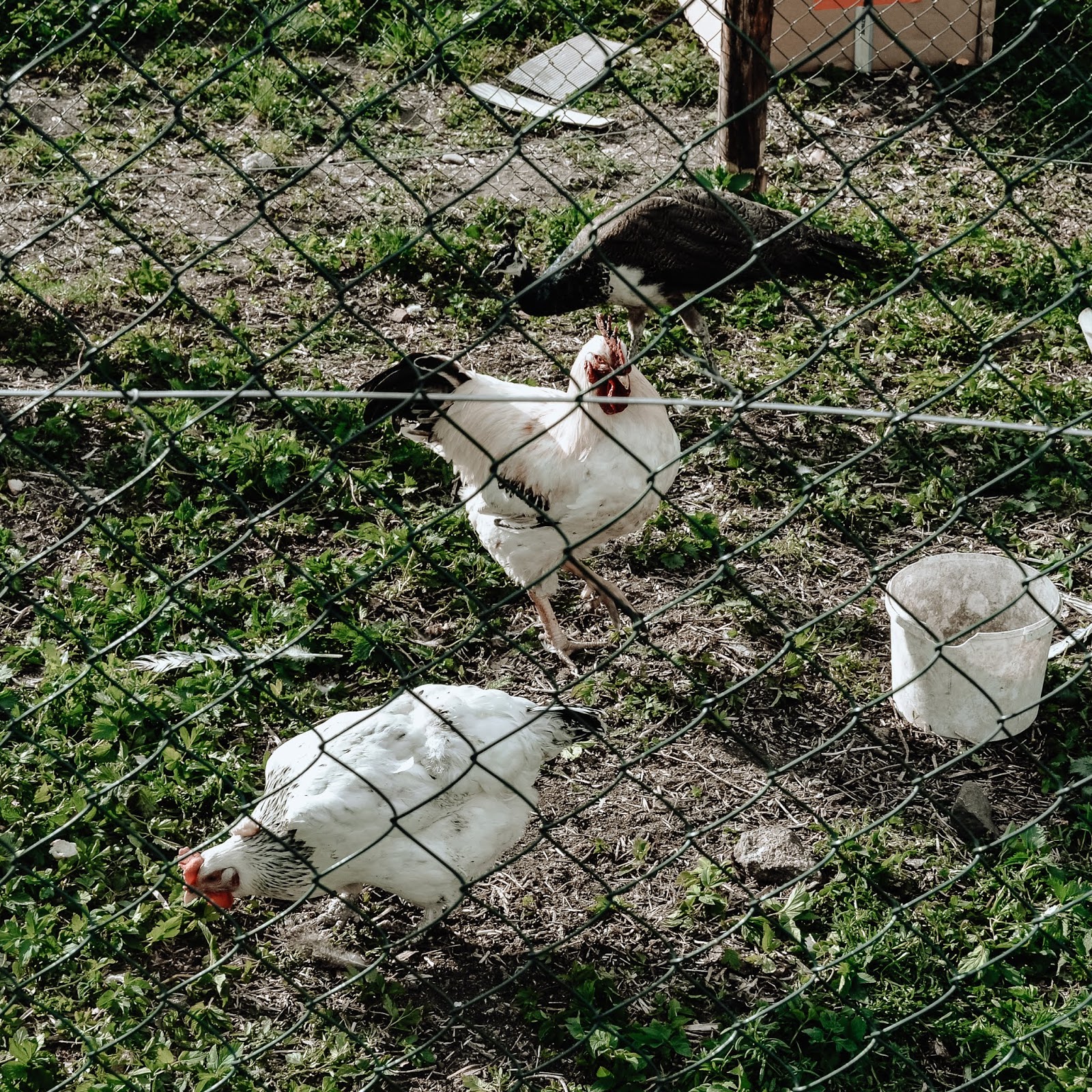 Since I strongly doubt that somebody remembers in detail the anatomy of the domestic chicken and specifically its reproductive system, I will start with that. Although the reproductive system of hens is different from ours, the beginning is the same – the egg cell is released from the ovary, which travels through the oviduct (where fertilization can occur); then it’s covered in layers of protective substances, the last one being the hard shell from calcium.
Many years ago, the chickens had 12 – 13 eggs a year. For the only purpose – to have all the eggs fertilized, from which little chicks could hatch. But then, a man got hold of a chicken and found out, that besides meat, the eggs are edible as well; also that the chicken lays eggs even if they aren’t fertilized.
A short simple interpolator for those who don’t understand how it works – the hens lay eggs for the purpose of having young, but they lay them even without a rooster; because the released egg doesn’t know if it’ll be fertilized in the oviduct or not. The principle is therefore exactly the same as reproduction in humans, and chicken eggs can be compared to menstruation. In the wild, the hen would be fertilized – and after the chicken has around a dozen eggs, it sits on them, keeping the eggs at a constant temperature, so the chicks can hatch. Even a fertilized egg is edible – if it is taken immediately by the breeder and stored in a cool room, it won’t hatch.
As I mentioned earlier, the hens used to have only a few eggs a year, nowadays they lay them every 24 to 48 hours, so about three hundred eggs a year; thanks to breeding, which ensured that the hens lay eggs even in winter (otherwise they didn’t, because winter is far from being the ideal season for breeding, since the chicks would freeze), but mainly because the hens are not in the same space as the roosters (and there’s no fertilization), and people take the eggs from them every day (that is, even if fertilization occurs and the egg is laid, it waits until there’s around twelve of them). Again, we get to the point that eggs are definitely not intended for humans – and hens lay eggs for themselves, or more so to survive as species.
Most of the eggs we eat in Slovakia are from big factory farms – and up to 75% of all eggs sold are from battery cages. It’s the most economical out of all of them, because it allows the storage of individual hens on themselves, hens don’t run under the breeders’ feet, and since everything is automated, collecting the eggs requires minimal effort. But at what price? In cages that damage their feet, are around twenty of them. Each hen has a space smaller than one basic printer paper. They have no room to spread their wings, to walk, they never see the sunlight, they’re under constant stress, which results in feather plucking and attacking.
Indoor husbandry seems to be a better alternative – but it still doesn’t allow hens the ideal living conditions. Hens are in huge halls, where they’re literally thousands of them, and they still have no daylight and enough movement. Therefore, the best is free-range where the chickens can walk on the grass and be outside. However, this increases the cost, which is then reflected in higher egg prices.
As I mentioned, chickens in the factory farms (now I don’t count free-range, which it’s only in 5 percent in Slovakia) are under constant stress. In such situations it’s natural for them to rip out their feathers or attack other hens; but for farmers it’s, of course, undesirable. That’s why they often trim their beaks – although I didn’t find if they do it in factory farms, but they do it in small-scale farms, so the answer is obvious, And as usual, without any anesthesia. When they trim the beak, they often damage the nerves and blood vessels; therefore, eating causes a lot of pain and the hens die of starvation.
Such chickens live for a maximum of two years; although in the wild it would be up to eight. But they’re dying much earlier because of reduced egg production and injuries. Since the egg shell is composed of calcium, the whole laying process is very difficult for the hen’s body – and the body often extracts calcium from the bones, making the skeleton fragile and prone to fractures. In the wild, this problem would not be at all – because hens wouldn’t lay so many eggs, but also because they would eat the unfertilized eggs.
And to make matters worse, as we are only talking about hens, let’s not forget that in this industry, roosters are basically unnecessary – they’re only useful for breeding. And if we assume that 50% of the roosters are born, half of the chicks are useless. There’s no point in keeping them, so they end up in a grinder that literally crushes them alive, or they suffocate them with gas. 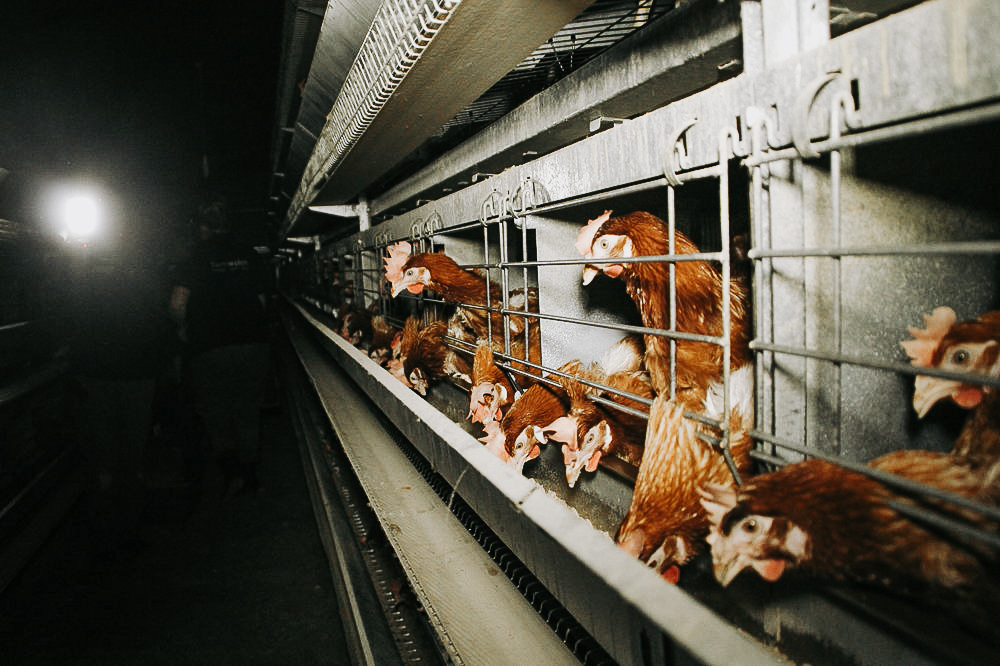 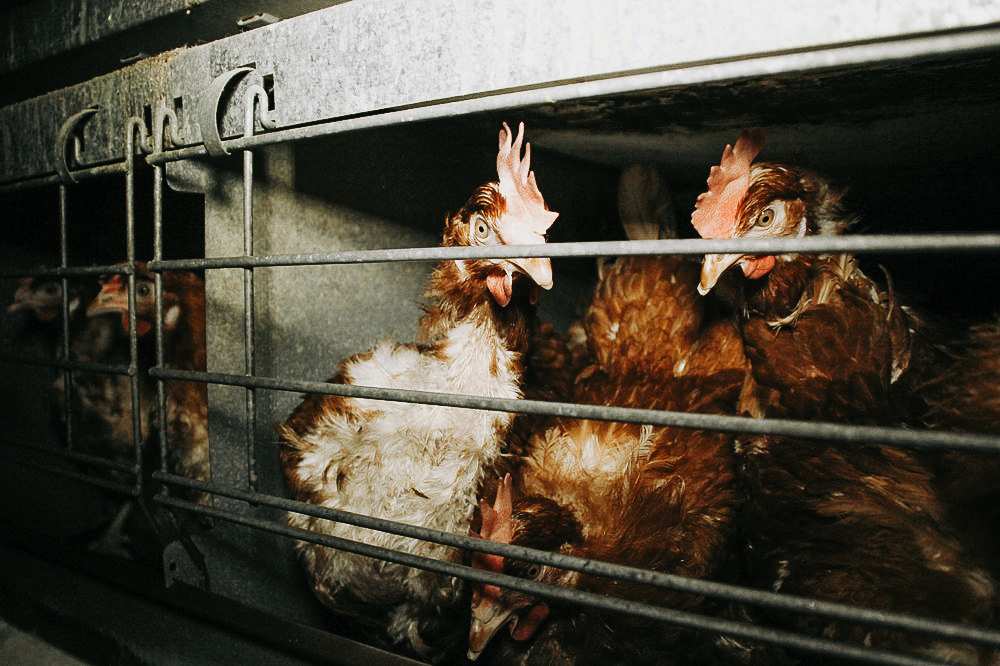 Source: HERE. Pictures are edited.
Even the small-scale farms aren’t perfect. Even though they aren’t as cruel to hens because they have more space to live, they often have free movement around the garden, so they can walk and be on a fresh air, but some breeding practices remain the same. Beak trimming is recommended by many farmers. Starving the hens is not so unusual either – by decreasing the ammount of food or stopping it for a few days, the egg production will increase.
Purchasing the hens is not normal either. Most households who decide to have chickens also need to have them from somewhere – and most often it’s from a specialized company. And for one chick you pay 52 CENTS. (Can you imagine selling human children at such price?)
And where do the hens end up when they don’t lay enough eggs, have fractures or are simply exhausted? On a plate. In large-scale farms, dead hens are often sold to factories where meat is transformed into products (because such hens don’t have the most beautiful meat and no one would buy it at the supermarket, but it’s still edible); and in villages it’s no different. 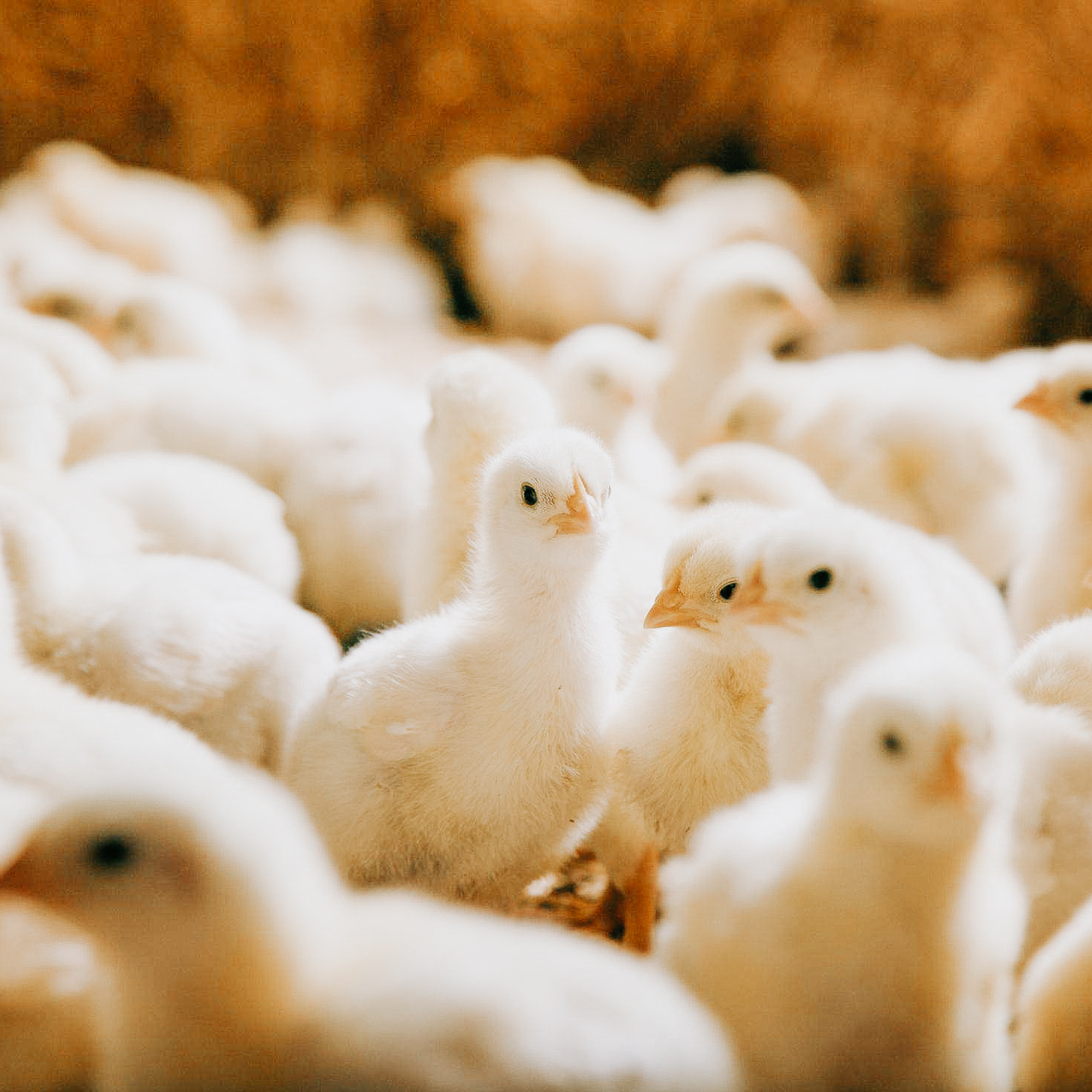 Source: HERE. Picture is cropped and edited.
The hens wouldn’t survive in the wild without us. Yes and no. If you threw a bred hen which was raised in a cage from the birth and doesn’t even know how the grass or the sun look, into a wild, of course, it wouldn’t survive. But the hens existed in the wild long before people took hold of them. And they didn’t need humas to survive at all.
Again, I’m reminding what I’ve already written in an article on bee keeping and honey production – where do people even have the right to take eggs from hens? To genetically modify them to lay more than twenty times more eggs than it’s normal for them? If this is how the breeding and selling dogs would look like – so they’d be locked in a tiny cage, they’d cut off parts of their bodies, and they’d force them to lay breakfast for people – it would be shut down after one day, because it’d be unacceptable. Who then forced us into thinking that one is okay and the other is not? Why is a chicken less than a dog?
If you have the option, choose other alternatives. And there’s a lot of them – even when baking, as well as for breakfast. Or at least buy eggs from small farms or from free-range chickens; and don’t support violence, inhuman behavior and cruelty. Even animals have feelings and have the same right to live as humans.