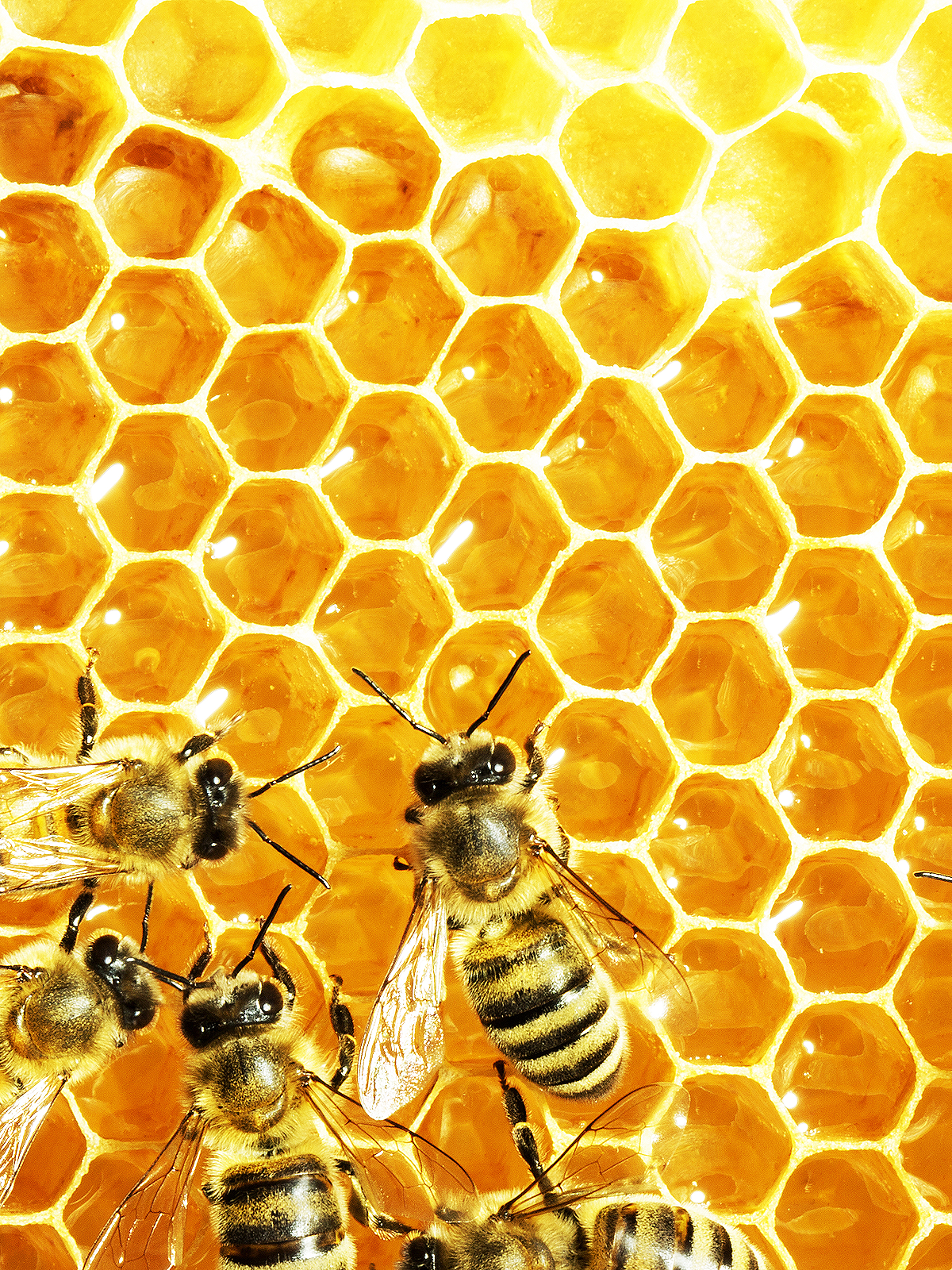 Source: HERE. Picture is cropped and edited.
Everyone can understand why vegans don’t eat mat, why they don’t consume milk and dairy products and why they avoid eggs. But many people don’t understand why vegans don’t eat honey either. I mean… the bees produce it for us, don’t they? It’s their only job, they produce a lot of it, it’s delicious, it has been used as a medicine for thousands of years and it mostly, it doesn’t harm them.
To some extent, it’s true. Honey production doesn’t hurt bees in any way. But it hurts them how people treat them. 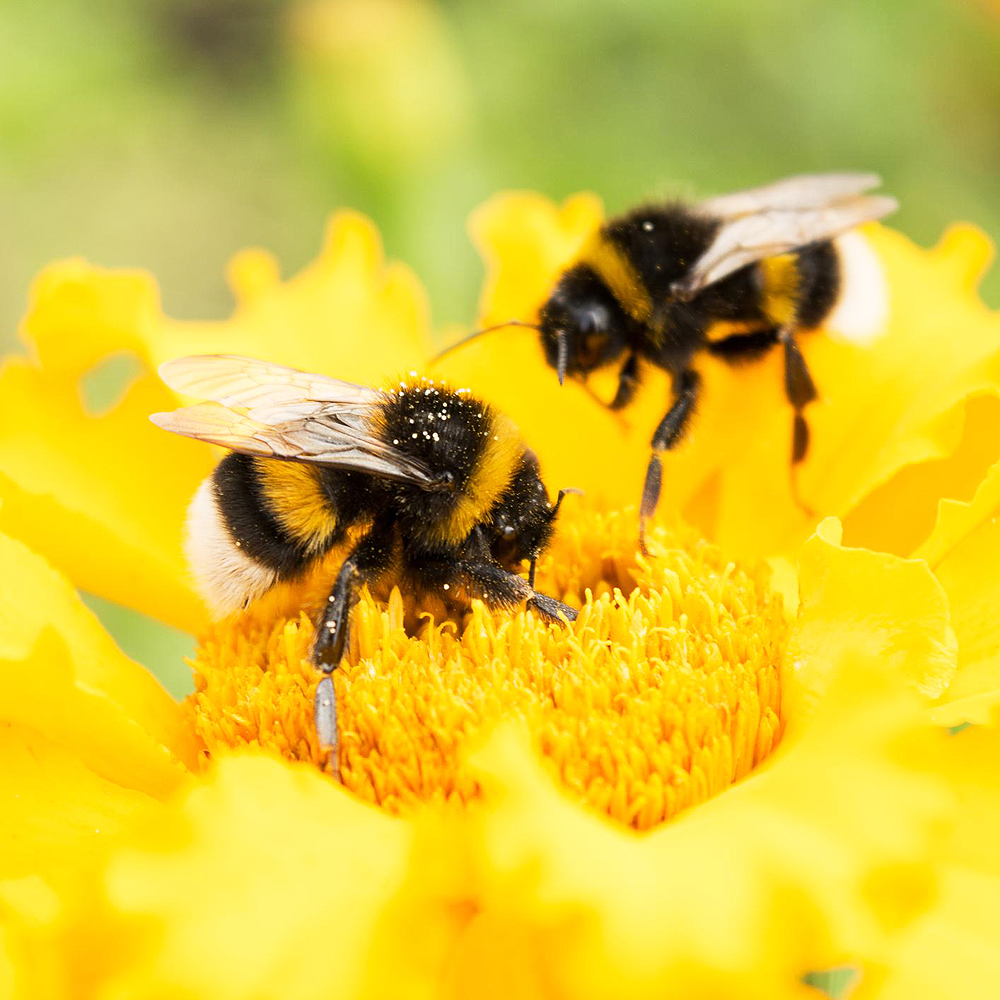 Source: HERE. Picture is cropped and edited.
Honey is a golden-brown liquid produced by honey bees. They visit flowers or trees several times a day, from which they collect nectar and honeydew – nectar is a secretion from flowers, honeydew is found on leaves and pine needles. Bees suck these sugar substances into a special stomach, which doesn’t digest it, where they mix with enzymes that breaks sucrose into glucose and fructose. When the bee returns to the hive, it passes the fluid to the younger bees – which devoured and discharge it several times. Thus, the liquid is mixed with other enzymes and water is evaporated. When “honey” is dense enough (the nectar contains 40-80% water, “honey” only 30%), the bees put it in the honeycomb where it ripens and more water evaporates due to the high temperature in the hive and waving wings. Once its moisture drops below 17%, the bees seal it with a wax cap.
Bees produce honey primarily for themselves. It’s their primary source of nourishment for them to hibernate (because flowers don’t grow in the winter and bees don’t come out of the hive). It contains a lot of sugar, so it gives them the necessary energy, and it’s also a source of nearly two hundred different nutrients for them.
Right at the beginning I will say that not all beekeepers are hurting bees explicitly. In Slovakia, we are used to small-scale honey production – in Slovakia, individuals, or more so families are beekeepers, they own several hives and sell honey at fairs, by the road, in their small village shops or supply them to larger retailers. They care for bees, practise this craft generation by generation, and also help Slovak agriculture.
But that doesn’t change some of the facts I will present in this article. And it doesn’t change the fact that the considerable amount of honey we consume comes from wholesalers, where it’s no longer so nice and great; it doesn’t change that many owners of bees intentionally hurt them – and I’ll explain why. There’re several reasons why vegans don’t eat honey; and the main is that it’s an animal product. And before you start rolling your eyes, I’d like to remind you that vegans don’t eat animal products not because they have just thought to do so, but because people have absolutely no right for something that belongs to animals (or what an animal IS) because they are self-existing creatures that people only use for their profit. 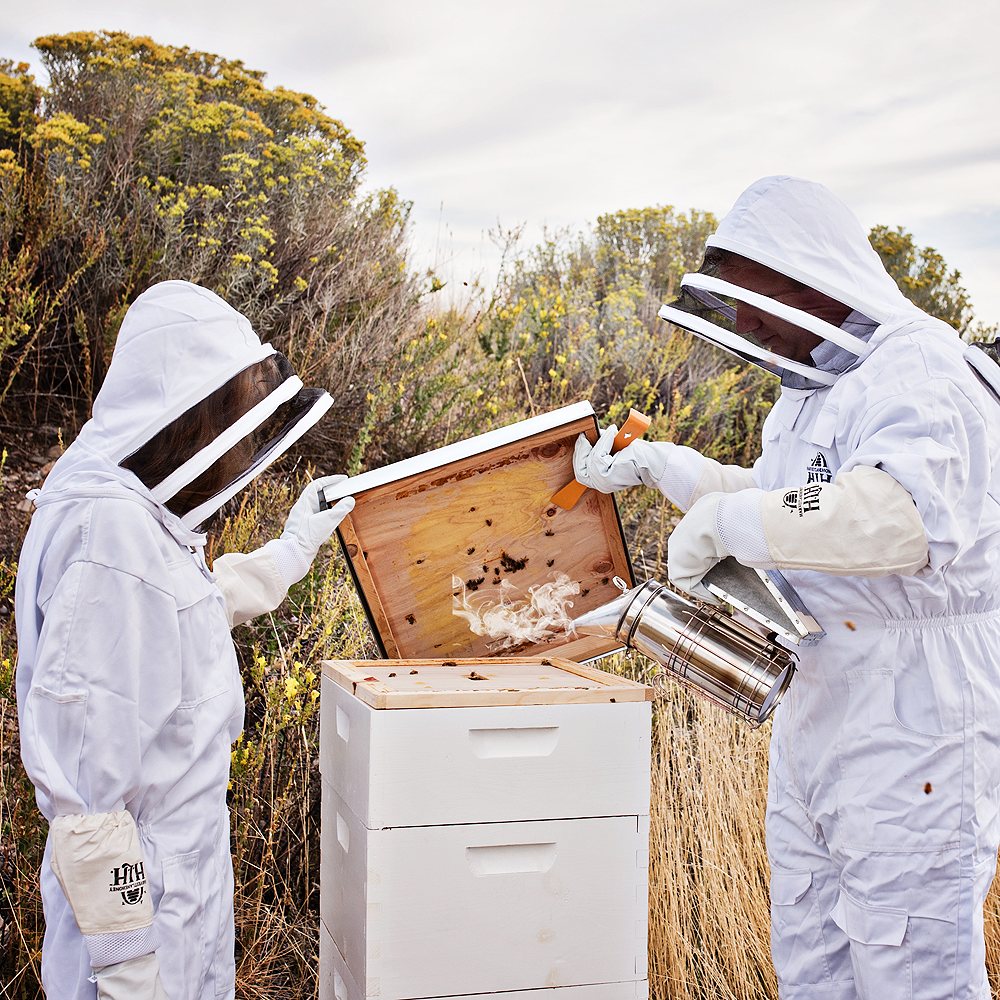 Source: HERE. Picture is cropped and edited.
People hurt the bees more than you think. Sometimes, of course, it’s unintentional, but it’s often deliberate and has a single goal – laziness. The sale of honey is now business like any other. And the more honey, the more money.
I don’t know about you, but when by a “beekeeper” I think of a sweet grandpa, who puts a mesh cap on his head, takes a honeycomb from the hive, scraps the honey – and then sells it at the market. I’m not saying that this grandpa-beekeeper doesn’t love his bees – but sometimes he can’t avoid hurting them.
When beekeepers collect honeycombs from their hives, they must first smoke the hive. It’s so that the bees don’t sting them. The smoke evokes a forest fire – so bees “suck” as much honey as possible so that the hive doesn’t burn out with all their supplies, and since they’re distracted, they don’t perceive what is happening around them. In addition to the fact that many bees die when they breathe too much smoke, the whole process is quite stressful (it’s basically the same as if someone put smoke into your home – you’d panic, too). Some bees will die when the honeycombs are removed from the hive – the combs are very close to each other, the bees are flying around and it happenes, that the comb squeeze them to death.
As I said, selling honey is a business. And although I’d be quite surprised if even the Slovak beekeepers were practicing these ways, it doesn’t change the fact that it happens – and I’m telling you this because even the honey you buy in the supermarket that has “produced in the EU” written on it, can be a product of bees that haven’t been cared for in a nice way.
I’m talking about starving bees and burning hives. First of all, beekeepers cannot take all honey from the bees, because it’s their food. That’s why they often replace it with a similar but cheap alternative – sugar water. However, it has absolutely no benefits (except for energy) for the bees; and so-fed bees have shrunk stomachs, weakened immune systems, and are more prone to pesticides, leading to their extinction. However, this is not all yet – if it’s not advantageous for the beekeeper to take care of the hive even in the winter, he either starves the bees or burns the whole hive.
However, let’s go to practices that are also used by beekeepers in Slovakia.
The first is cutting the queen’s wings. This is to help prevent swarming – the natural multiplication of bee colonies when the swarm leaves its original home and moves to a new place. The swarm follows its queen – and when the queen has her wings cut, she cannot take off, and thus cannot move to another place.
Another cruel and inhumane practice is violent artificial insemination. If you no longer remember the basics from biology, the queen bee is the only one in the hive who can lay eggs – the new queen bees fly out of the hive, mate with ten to fifteen drones, and they gradually use the sperm they store in the body for the next five years; and she can lay up to two thousand eggs a day. The reason for artificial insemination is simple – control. It also has its own advantages – such breeding makes bees more resistant to pesticides and parasites, but the process is very unpleasant, even disgusting. And the drones used are – of course – killed after the “material” is taken.
The necessity of controlling the hive is exactly what leads to targeted killing. When the production of eggs of the bee queen decreases, the beekeeper replaces it with a new one as the productivity of the whole hive is reduced. The old queen will be replaced by the new often after two years. And they will kill the old queen. Or the whole hive will burn. 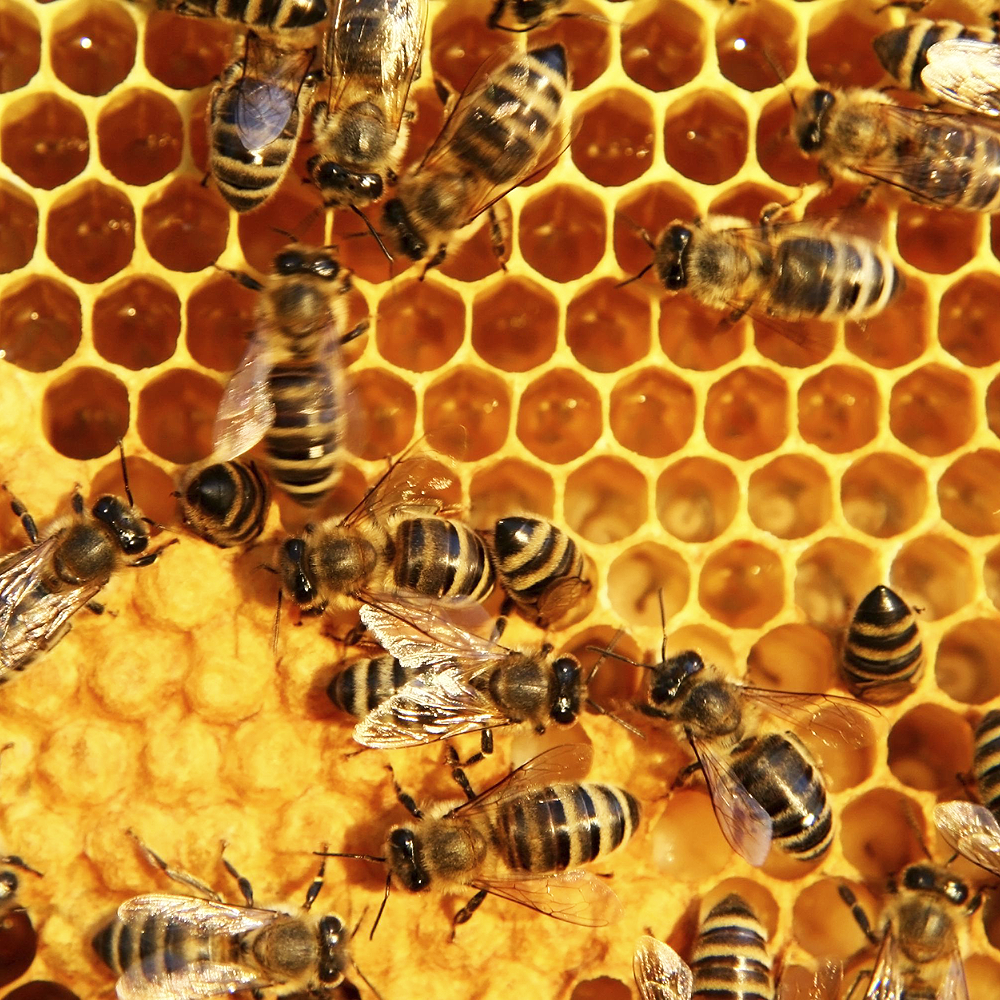 Source: HERE. Picture is cropped and edited.
Cruel is also obtaining the bee venom. It’s used in alternative medicine and can have positive effects on improving rheumatism, sclerosis, swelling or inflammation. The worker bees are irritated by an electric shock, which makes them sting and leave a drop of venom on the prepared glass. While it’s true that not every bee will die after stinging, and the current process of collecting poison is trying to prevent massive dying of bees by letting them sting into a softer material, the bee is able to retract the sting, but it’s not perfect, and many bees die anyway.
You’ve certainly heard of a royal jelly and its excellent qualities. The royal jelly is a bright secretion of the glands of young bees, which basically makes a bee queen a bee queen (of course, genetic assumption is also important) – and gives it the ability to live longer than other bees and lay a huge amount of eggs. It’s only collected by beekeepers who focus on breeding queen bees. They take out a few-day larva from the honeycomb cell, which – of course – dies, and take the royal jelly.
Even the bee queens shop is not very nice – and in Slovakia you can buy it via the internet. And they will deliver it to you by mail. 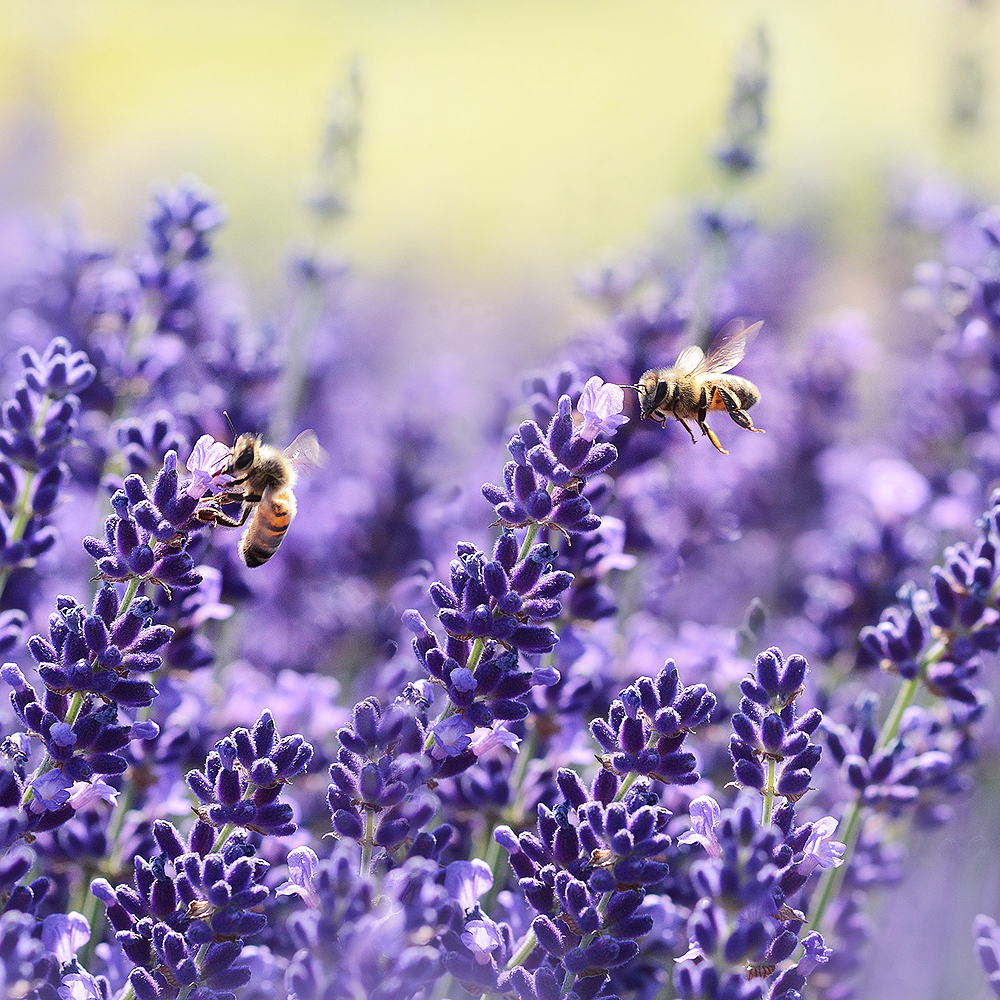 Source: HERE. Picture is cropped and edited.
Can you imagine we would treat people this way? That we would smoke out their houses to steal their food? Cut off their legs so they couldn’t go anywhere? Fertilize them without their knowledge? Shock them with slectricity? Massively kill unborn children for a few drops of some substance? And send children to each other by mail?
Bees and beekeeping are very important for agriculture. Although the bees collect nectar to feed themselves, they also pollinate flowers and trees. And the vegans are not against stopping people from caring for bees – thanks to people’s help they have better protection.
Vegans are against the exploitation of bees – taking honey that honey bees create for themselves and not for humans. They are against the inhuman and vile ways that hurt and kill them.
Finally, I will say that there’s a big difference between deliberate and unconscious killing. Each of us has already killed hundreds of ants and other insects on earth – even vegans. Insects die when crops are harvested. But there’s a huge difference between stepping on ants by mistake and burning out a hive just because you don’t want to take care of bees in winter.